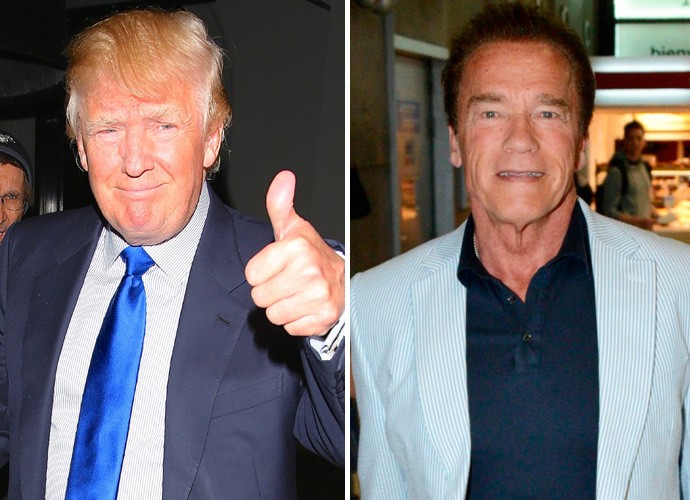 There are more important things to focus on right now, good Lord!

Donald Trump is going to be our President in two weeks, but that isn't stopping him from sending out petty tweets slamming new host Arnold Schwarzenegger's Celebrity Apprentice ratings. "Wow, the ratings are in and Arnold Schwarzenegger got ‘swamped’ (or destroyed) by comparison to the ratings machine, DJT. So much for being a movie star-and that was season 1 compared to season 14. Now compare him to my season 1.

But who cares, he supported [John] Katich & Hillary [Clinton]," he wrote on the social networking site. The reality show snagged 4.9 million viewers and received a 1.3 out of 4 rating for a key demographic of adults under 50, whereas the previous season hosted by Trump got 6.8 million viewers and earned a 2.4 in the under 50 category, according to The Wrap.

This season's contestants include Laila Ali, Brooke Burke-Charset, Boy George, Nicole “Snooki” Polizzi, Kyle Richards and Porsha Williams. The advisers are Warren Buffett, Steve Ballmer, Tyra Banks, Jessica Alba and Patrick Knapp Schwarzenegger. The Terminator didn't stoop to the new POTUS' level with his response, and it made us respect him even more.

"There's nothing more important than the people's work, @realDonaldTrump ... I wish you the best of luck and I hope you'll work for ALL of the American people as aggressively as you worked for your ratings," he wrote, before posting a video of himself reading Abraham Lincoln's first inaugural address.