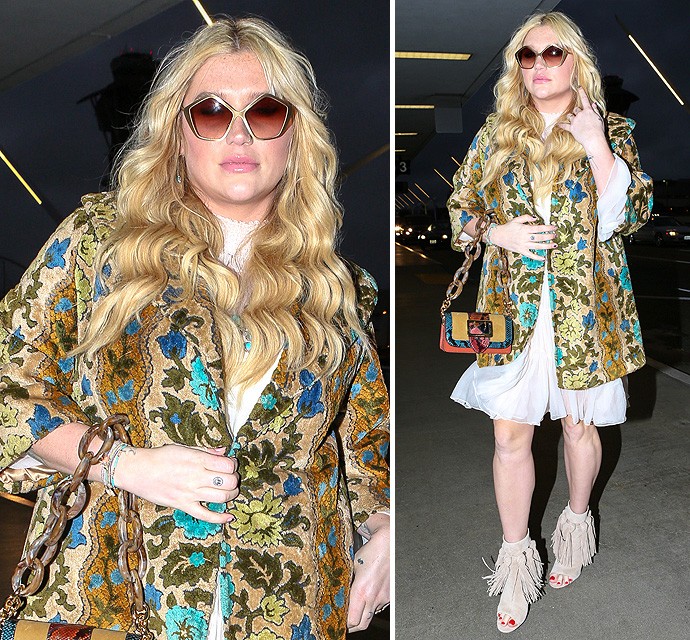 Kesha wore an interesting look, as usual, as she touched down in Los Angeles, on Thursday. In a printed velvet coat with fringed boots and large sunglasses, Kesha certainly has a unique style!

The pop star has to find fun in fashion because she's deep in a legal nightmare with her former producer Dr. Luke. The court battle is STILL raging, even though Kesha dropped her sexual assault lawsuit in California, she's moving forward with it in New York. And now, in an interesting turn of events, Lady Gaga and Katy Perry have been dragged into the lawsuit because of an old text between Kesha and Lady Gaga.

This new evidence was submitted by Kesha in the discovery phase and now, the judge says Dr. Luke "may share with Lady Gaga and Katy Perry the April 2016 text that Kesha sent to Lady Gaga, which Kesha turned over in discovery." We're baffled as to what the text would prove or how it would help Dr. Luke's case and we may never know ... the text will remain confidential and both parties' attorneys will decide if it's used in court.

Gaga has previously expressed her support for Kesha, meanwhile Perry hasn't weighed in. Kesha sued Dr. Luke for sexual assault and battery in 2014. He countersued for defamation and extortion. Kesha sought a preliminary injunction to allow her to release new music outside of her contract with Dr. Luke and the judge denied that request last February. So Kesha's stuck.

BUT we have news she's going to move forward with some new music anyway ... Kesha's set to get to work on a new single! X17online can report, exclusively -- she's planning a single with the lead singer of the hit band OneRepublic.

A source tells us, "Kesha's desperate to release new music. She's not sitting around doing nothing, she's been in the studio, she's just bound by this old contract the judge wouldn't release her from. But she's been put together with Ryan Tedder and they're doing something. I've heard it's amazing.

" Tedder's a songwriter and has penned songs for the likes of Beyonce, Adele, Madonna, U2 and J Jo. We can't wait to hear this collaboration!