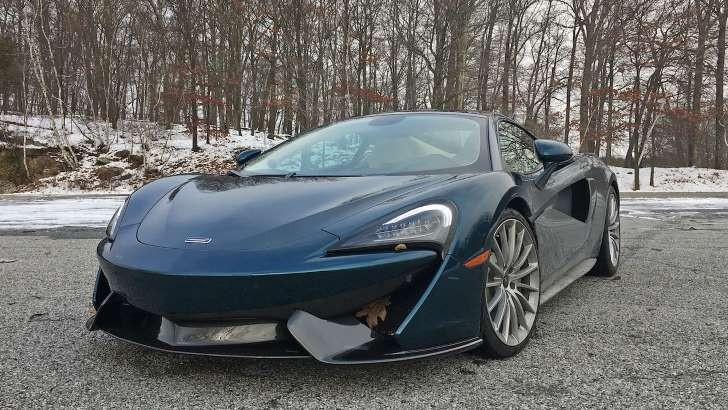 Some supercars are made for track work. The McLaren 570GT is not one of them.But that's in no way a slight against it.   At least, not in my book. The automotive world is filled with cars that offer certifiably insane performance on a closed course, but are barely usable on the street-if they're legal to take on public roads in the first place. McLaren itself makes more than a few of them.

The 570GT, though, is designed to offer 95 percent of the performance of those cars with five times the usability. It rides comfortably over broken city streets, offers as much storage capacity as your average compact car, and it's roomy enough to fit all six-foot-four-inches of my Lincolnesque frame with space to spare. It's well-mannered and comfortable, even luxurious in a minimalist sort of way. But slam the gas down, and it takes off like a JATO-assisted cheetah; nail the brakes, it'll stop on a dime and give you nine cents change; spin the wheel into a turn, and it'll clip apexes and cling to lines as though the ghost of Bruce McLaren himself had taken possession of the car. 95 percent of certifiably insane is still pretty crazy.

If you're a loyal reader (which I hope you are) who's into McLarens (and why wouldn't you be), you've likely already read chief auto critic Lawrence Ulrich's review of this very same car. Lawrence has been driving around in sports cars since before I was born, so I can't come close to touching his expertise when it comes to judging these sorts of vehicles. But given a chance to take the 570GT out of the city and upstate for the day, well...it seems almost a crime to not share my thoughts after blasting around in this gentleman's supercar for a few blissful hours.

Jessica Simpson Flies Out Of Town With Her Adorable Family
Comments