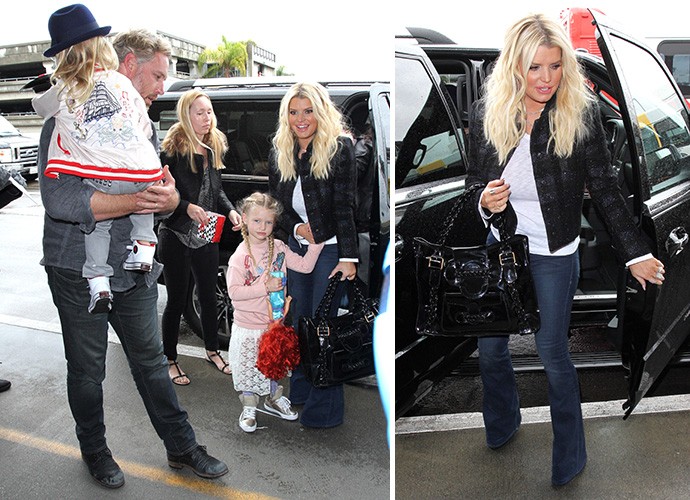 jessica simpson,
Jessica Simpson Flies Out Of Town With Her Adorable Family

Jessica Simpson and husband Eric Johnson caught a flight out of LAX today with daughter Maxwell and son Ace, and the fashion mogul was all smiles despite the hectic travel day ahead of her.

Rumors were swirling last month that the blonde bombshell was pregnant again, but it certainly doesn't look like there's a baby bump under that white t-shirt to us!  Given how well their genes mix, we think the couple should have another little one! We guess it's possible she's got a bun in the oven and just isn't showing yet, but given what she has hinted about her goals for 2017, it sounds like she's focused on making her musical comeback.

One person not willing to help the buxom Texan put out new tunes? Taylor Swift! "Jess hoped Taylor would lend a helping hand. She reached out to Taylor, hoping to do a duet or maybe just hang out together to help raise her profile. She’d love nothing more than for Taylor to write her a hit song.

But Taylor said she was too busy!” a source dished to the National Enquirer. Popping out another kid would probably be easier for her than churning out a chart-topping hit!