As Europe Grasps for Answers, More Migrants Flood Its Borders

HEGYESHALOM, Hungary — Throughout the day on Sunday, train after packed train arrived at this border town from Budapest, the passengers smoothly shifting to a gleaming Austrian train on the opposite side of the platform and being whisked on to Vienna and beyond — 13,000 of them in the first 36 hours after Hungary allowed throngs of refugees and migrants to travel toward Germany.

But that is not the end. Thousands of migrants continue to flow through the Balkans toward Hungary every day, rapidly approaching its southern border with Serbia, government officials said. Two Greek ferries carrying more than 4,000 migrants were scheduled to land Sunday in Athens, a first stop on the migrant trail through the Balkans. Despite cheers of welcome in Germany, and tears of relief from weary migrants, it remained unclear how Europe would deal with successive waves of migrants, which humanitarian groups have assured are on the way, perhaps for months or even years, until the wars, poverty and other underlying causes of the dislocations have abated. 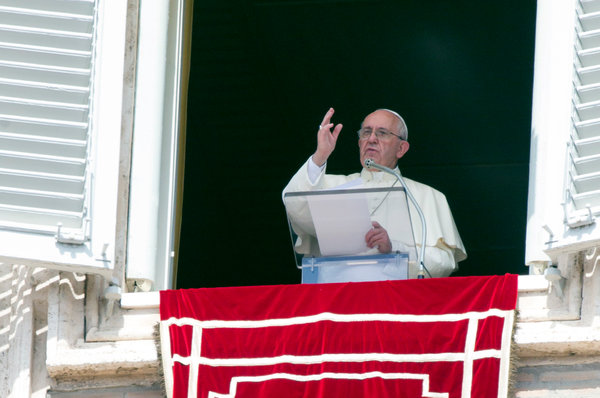 On Sunday, Pope Francis called upon Catholic parishes and religious communities to take in refugees. And Germany has called for a quota system to distribute the migrant population evenly throughout Europe.

But the European Union remains deeply divided over what should be done, a debate that has strained relations and threatened the 28-nation bloc’s proud policy of open borders.

Far-right politicians, mostly quiet so far, found their voice on Sunday with Marine Le Pen of France, the National Front leader, complaining that a widely dispersed photograph of a drowned Syrian child that had shocked the world was being used to make Europeans “feel guilty.”

A gathering of foreign ministers in Luxembourg on Sunday produced only more discord. More talks are scheduled for this week. Germany, which has admitted by far the largest number of migrants — it expects to accept 800,000 this year — has called upon other nations to accept more, but found much resistance, especially in Eastern Europe.

“We have been facing this challenge for several months, and we continue to take in refugees,” said Peter Altmaier, chief of staff to the German chancellor, Angela Merkel. “But we need a readiness in other European countries to join in.”

Human rights groups say that, for the foreseeable future, there is every reason to expect migrants from Syria and other countries in crisis to descend on Europe in ever greater numbers. In Syria alone, 11 million people have been displaced by war, seven million within the country’s borders and four million outside, mostly to Lebanon, Turkey and Jordan.

The number of Syrians requesting asylum in Europe rose steadily for years before attracting international attention, reaching an estimated 348,000 since April 2011, the month after the civil war there began. The numbers are accelerating as the war worsens — from 8,000 asylum claims in 2011 to 56,000 in 2013 and 150,000 in 2014, according to United Nations figures. Those numbers reflect only asylum claims, not the far greater flow of those claiming refugee status.

Migrants in Roszke, Hungary, on Sunday after crossing the border from Serbia. Rights groups say Europe should expect extensive migration for some time.                         Credit            Marko Djurica/Reuters
Another factor in the increase is the discovery of routes through Turkey and Greece that are safer and often cheaper than the old route through Libya, which involved a perilous land trek and an equally dangerous ride across the Mediterranean Sea. Human rights experts say that the combination of the new routes, an apparently welcoming Europe, deteriorating security in Syria and the higher socioeconomic status of the recent migrants virtually ensures increases.

Hungary, on the front lines of the crisis and led by an anti-immigrant prime minister and governing party, has sent mixed signals on its intentions. While allowing migrants already in the country to head to the West, officials began a crackdown over the weekend on new arrivals. Hungary opened a new holding camp with space for 1,000 people — surrounded by razor wire and guarded by dogs and the police — in the southern border town of Roszke, and rights groups quickly assailed the camp as inhumane.

Hungary is also building a razor-wire fence along its 108-mile southern border with Serbia, and it has passed harsher laws involving the treatment of migrants and penalties for helping them. Prime Minister Viktor Orban has cast it as a fight for Christian values against a Muslim surge.

On the Austrian border on Sunday, however, cooperation between the Hungarian police and Austrian rail officials created a seamless corridor through Hegyeshalom, the main crossing between Budapest and Vienna.

Magdalena Frank, a real estate agent from Vienna, squatted with a circle of volunteers on the dusty platform at the Hegyeshalom station, part of an assembly line of sandwich makers. “We are waiting for a train of refugees due in a few minutes,” she said, pushing a lock of hair out of her eyes.

All around were piles of diapers, bananas, savory pies, dates and enough bottled water to fill a swimming pool. “When we heard what was happening, I contacted some friends and we decided we had to come and help,” said Barbara Secka, a mechanical engineering student from Vienna. “We all began cooking.”

When the 5 p.m. train from Budapest arrived, a half-hour late and with standing room only, more than 500 migrants poured onto the platform. “Welcome!” the volunteers shouted in English. “Have something to eat!” With stunning efficiency, the volunteers distributed the aid, moved the migrants into the adjacent train and waved goodbye as it pulled out of the station.

Meanwhile, a convoy of more than 100 Austrian vehicles made their way to Budapest on Sunday, vowing to offer rides to Vienna for any migrants who wanted them — and ignoring warnings from the Hungarian authorities that this violated that country’s refugee laws.

Along Hungary’s border with Serbia, the scene was anything but smooth.

“While Europe rejoiced in happy images from Austria and Greece yesterday, refugees crossing into Hungary right now see a very different picture: riot police and a cold, hard ground to sleep on,” Barbora Cernusakova, an Amnesty International researcher, said in a statement released by the group.

The new camp in Roszke was being called a “reception center” by Hungarian officials, though the police on the scene referred to it as an “alien holding center.”

Both migrants and relief groups were reporting harsh treatment and a hostile reception from the border authorities. On the Serbian side, officials temporarily blocked at least some trains headed north, amid numerous reports of the police demanding bribes to allow the migrants to pass.

Photos on social media from the new camp showed the police with dogs guarding a desolate compound surrounded by high fences.

Omar Hadad, 24, from Dara’a, Syria, had been at a nearby camp along the border before he was shifted on Sunday to one west of Budapest, in the town of Bicske.