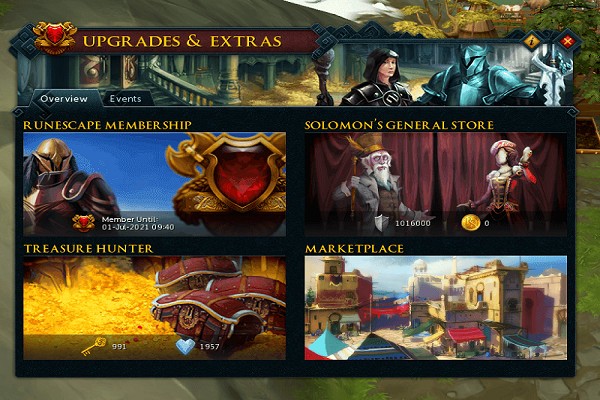 Redirecting OSRS Gold players into the suitable subreddit. The solution will be to produce a rule or bot (similar to the"Ninja Request" one) that shows people the other Subreddit available for them to produce the question. However, users make a good job already by redirecting those people there, and there's the Subreddit link on the bannerads, under Partner Subreddits, there. However they are nevertheless downvoted by them. Both the Downvotes here, and the majority of users are like the ISR, there. You can't remark anything remotely constructive since they are already biting your foot.

From the OSRS and pathofexile subreddit that I common not every small question has asked in the megathread, some people today continue to make their own threads asking themand over the years I have barely ever seen anybody even mention that, they simply reply it as usual. No need for every question to be diverted to it, but not everyone that has a question wants to make their own thread. Perhaps it's that the issue, maybe they just think it does not justify you, not sure where most of them endure but I have read about a few reasons. My train of thought is that when a new participant sees a megathread that is stickied they feel welcome because there's a place created to do so to inquire things. I see it as the distinction between someone welcoming you vs welcoming you.

The time I have had playing Runescape

Nearly got our kill and tried to do a duo in corp for a few hours last night taken every moment. People might wait using a zest until corps stats empty to zero then run in with two accounts, one with spec move and you smacking a crystal halberd against it. We tried using the private portal, but the 200k feels just like a punishment for trying to play Runescape legit and it slowed our kill time since we had to wait to enter in as not to eliminate the case. I understand this has been an issue for a very long time, but if we do not keep reminding the Jmods which it's an issue nothing will ever get done. It just felt watching people grief for hours on end without any repercussions. Individuals which are too lazy to put in the job for a kill are, farming a bummer which sigils. This is the most helpless I have ever felt playing with OSRS.

As someone who's been crashed in a way that was similar lately, I've found a fantastic way to annoy the crashers would be to use a spell on these. They have to have to be able to obtain move that is spec accept on aid, so they can be interrupted by you with the tele-other possibly and instant even get them killed if corp has not been fully deprived of accuracy. It is the unfortunate truth. If you are in a duo try to empty his stats just enough to ensure you and your friend can just get away with a kill collectively. That way when some retard attempts to crash you can measure out of this space and theyll get stomped out from the corp beast even with his spec moves.

If you get crashed by a team of two or more it is tough luck, but the beauty of the above mentioned method is it cuts your spec time down to 1 second or less you can just hop and it is very little time lost. I've had some great fun watching crashers become lit the fuck up and have to tele out because they are bad at Runescape. Yeah, I suppose you are right. We could take a few kills back some of them came and spec transferred me rather of their dude which was hilarious lol. Yeah this shit stinks but wtf do you expect jagex to Buy RuneScape 2007 Gold perform? Crashing is a part of Runescape and frankly always was.