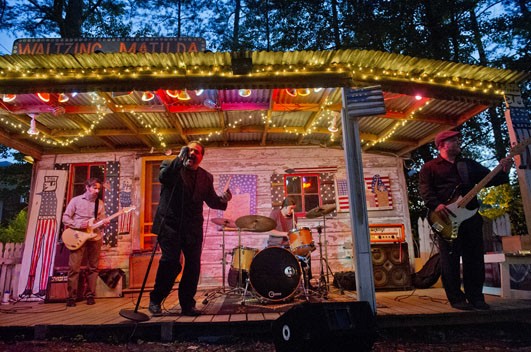 Bring your own food and drinks and enjoy a night of great live music under the stars. Seating is limited so bring a chair. Dogs on a leash are welcome.

October 14, 2017
Cody Marlowe Band
American born singer-songwriter and roots-rock artist Cody Marlowe found his inspiration at an early age in the soulful sounds of B.B. King, Merle Haggard, and the Allman Brothers. In the small town of Clermont, Georgia, Cody was born into a family of music

October 21, 2017
Dirty Bourbon River Show
The Dirty Bourbon River Show deftly melds sounds that range from hard-edged blues to Lisztian piano driven ballads to New Orleans brass into a result that is truly a blast of new energy into the musical landscape. Dirty Bourbon grabs hold of audiences, fascinated by their eccentricity and dexterity coupled with their ability to harken back to by-gone eras in music. Since forming in early 2009, the Dirty Bourbon River Show has released 9 studio albums and played over 900 live shows, fast earning them a stellar reputation for their tight, multi-faceted sound and high-energy performances. They can be found bringing their blend of “New Orleans Big Brass Circus Rock” all over the USA, performing at festivals and respected venues year-round.

October 28, 2017
Dead Affect
A band of seasoned musicians from Atlanta that plays the music of the Grateful Dead and they put their own “fingerprint” on it.