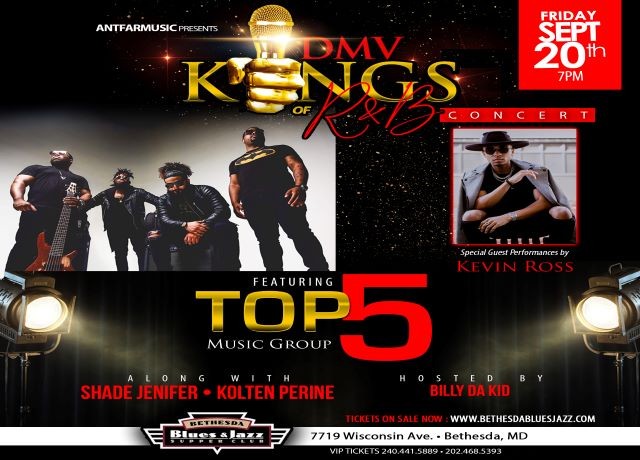 Top 5 band originated in the DMV area featuring an exclusive funk and R&B sound with a variety of creative musical arrangements. Top 5 is accompanied by some of the most talented musicians around performing live music from 1980s to the new millennium. The band's big stage sound is produced and arranged by Anthony Robinson, also known as Antfarmusic, with a crafty style that has been notably compared to nationally acclaimed bands Mint Condition and The Roots. The band has captivated audiences and rocked venues across the nation in major cities including New York, Los Angeles, Philadelphia, Baltimore and of course the DMV. Top 5 has also backed national artists such as Chante Moore, Raheem Devaughn, Kima of Total, Mario and special guest Kevin Ross.

Kevin Ross is a talented singer and songwriter born and raised in the DMV area coming from a family full of musicians. He attended the Duke Ellington School of the Arts and received a scholarship to the prestigious Berklee College of Music. He gained notoriety in 2014 in a holiday commercial by Glade singing the song "This Is My Wish" then signed with Motown Records which released his debut album "The Awakening" in 2017. His first official single "Long Song Away" became a major hit reaching #1 on Billboard's Adult R&B Chart. Ross is also an award-winning songwriter having written songs for artists such as Trey Songz, Nicki Minaj, Toni Braxton, Johnny Gill, SWV and Jamie Foxx. Ross will perform with Top 5 highlighting this great evening of music featuring DMV's Kings of R&B!