I Scream, You Scream, We All Scream for Ice Cream That Doesn't Melt!

Earlier this summer, a woman in Cincinnati noticed that her son’s Walmart-brand ice cream sandwich didn’t melt when he accidently left it outside for 12 hours, in 80-degree F weather.

Understandably surprised by the seemingly unmeltable ice cream sandwich, she tried the “experiment” again, with the same result. While other brands melted completely, the Walmart ice cream remained eerily intact. She then called a local news station, who conducted a test of its own, which you can watch in the video above.

After one hour and 15 minutes outside in sunny, 80-degree F weather, Walmart’s ice cream sandwich is still remarkably solid. Next to it, a scoop of another brand’s vanilla ice cream is turned to soup after just 30 minutes.

It’s unclear exactly how much cream these sandwiches contain in comparison to other brands, but it is suspicious that the spokesperson made no mention of the long list of “gums” and additives, like corn syrup, that might also contribute to its odd inability to melt.

These non-food ingredients are mostly used as food stabilizers designed to help food keep its shape (and you won’t find them in higher-quality ice cream brands like Haagen-Dazs).

If you look at the ingredients list below for Walmart’s “Great Value Vanilla Flavored Ice Cream Sandwiches,” you’ll see what I’m referring to:2

Also strange is the fact that Sean O’Keefe, a professor and food chemist at Virginia Tech, gave the opposite account of what happens if ice cream contains more cream; he said that ice cream with more cream will actually melt faster, which contradicts Walmart’s spokesperson.3 As reported by the Pittsburgh Post-Gazette, this means ice cream that’s low- or no-fat would take longer to melt:4

“More water means the ice cream will have to absorb more energy before it can melt. Also, low-fat ice creams tend to have more air whipped into them, which allows them to keep their shape longer.”

There is something unsettling and (literally) unnatural about an ice cream sandwich that doesn’t melt on a hot summer day. Equally unsettling is a hamburger that doesn’t go bad when left on the counter… for over a decade.

Wellness educator and nutrition consultant Karen Hanrahan has kept a McDonald's hamburger since 1996, which is pictured on the left below.  As you can see, when this photo was taken in 2010, the more than 10-year-old burger still looks the same as the fresh one on the right next to it… 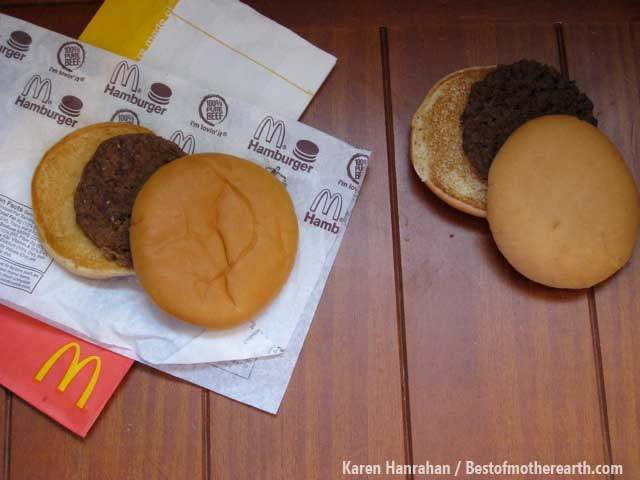 Part of the embalmed-like feature of the meat patty can be explained by the fact it contains excessive amounts of sodium (salt), which is a natural preservative that has been used throughout history. The patty, which is thin, will also lose moisture quickly, which means it may dry out rather than grow mold or bacteria.

But what about the bun? What kind of bread can lie out for years on end without developing so much as a trace of mold? The answer, I believe, is a "bread-like" concoction that bears no real resemblance to natural bread. Ingredients-wise, a McDonald’s hamburger bun contains:5

Real bread should only have a handful of ingredients, such as yeast, flour, eggs, butter, and milk or water. Contrast that to McDonald’s bread, which contains plaster of Paris, aka calcium sulfate, along with ammonium sulfate and ammonium chloride, which may cause gastrointestinal irritation with symptoms such as nausea, vomiting, and diarrhea.

Likewise with Walmart’s “ice cream”… to be labeled as ice cream, it must contain at least 10% milk fat. Beyond that, it can contain any number of additives that many would argue are not actual “food.” Real ice cream also contains just a few ingredients, like milk, sugar, cream and vanilla bean, bearing little resemblance to Walmart’s ice cream concoction. If you want to taste the best ice cream you’ve ever had, make your own at home using raw milk. It’s a relatively healthy treat when eaten in moderation (and, yes, it will melt if you leave it out in the sun).

Walmart is a prime example of where not to shop for food if you value your health. While it’s possible to find some healthy foods at Walmart, the vast majority of their food is heavily processed. Perhaps that’s why Walmart grocery stores are linked to obesity. An additional Walmart Supercenter per 100,000 residents increases average BMI by 0.24 units and the obesity rate by 2.3 percentage points.6

Researchers hypothesized that the substantial reductions in the prices of food at Wal-Mart Supercenters end up "reducing the opportunity cost of food consumption and increasing the opportunity cost of physical activity," thereby leading to a rise in obesity rates. Plus, ever since Walmart decided to significantly increase their organic offerings, they have been bombarded with accusations of selling substandard organic food, produced at concentrated animal feeding operations (CAFOs) or imported from China, not grown on small, US organic farms like consumers are led to believe.

They've even been accused of posting signs in their stores that mislead consumers into believing that non-organic items are actually organic. Perhaps worse, however, is that Walmart’s biggest sellers are heavily processed junk foods. The unmeltable ice cream sandwiches, for instance, are one of the most popular items in the dairy case, according to the company’s spokesperson. Processed foods may contain dozens of artificial chemicals that are in no way real "food." These include:

Food manufacturers typically claim that artificial food additives are safe, but research says otherwise. Preservatives, for example, have been linked to health problems such as cancer, allergic reactions, and more. Plus, processed foods often have the real nutrition processed right out, then sometimes added back in in the form of synthetic vitamins and minerals. These synthetics do not fool your body, however, and will not provide the whole, synergistic nutrition that eating whole food will. Instead, most processed foods are primarily composed of refined carbohydrates, which quickly break down to sugar in your body.

This increases your insulin and leptin levels, and contributes to insulin resistance, which is the primary underlying factor of nearly every chronic disease and condition known to man, including weight gain. Further, processing modifies or removes important components of food, like fiber, water, and nutrients, changing the way they are digested and assimilated in your body. Unlike whole foods, which contain a mix of carbohydrates, fats, proteins, fiber, and water to help you feel satisfied, processed foods stimulate dopamine, a feel-good neurotransmitter, making you feel good even though the food lacks nutrients and fiber.  This artificial dopamine stimulation can lead to excessive food cravings and, ultimately, food addiction. These, of course, aren’t problems confined to junk food sold Walmart; they exist for all heavily processed foods.

Shopping for Healthy Food on a Budget

People have thrived on vegetables, meats, eggs, fruits, and other whole foods for centuries, while processed foods were only recently invented. Many of the top executives and scientists at leading processed food companies actually avoid their own foods for a variety of health reasons, and it’s very clear that focusing your diet on whole foods in lieu of processed foods is essential for your health.

If you’re shopping at Walmart because you’re on a tight budget, it's a common misconception that buying pre-packaged processed foods is less expensive than eating fresh and cooking from scratch. Don't fall for this notion. When you consider the nutrient value of fresh versus processed-to-death denatured foods and the subsequent health consequences of each choice, it's quite clear that you can eat well and improve your health and still not spend a fortune. Some of the healthiest foods are incredibly affordable, even under $1 a serving, such as:

In order to protect your health, I believe you should spend 90 percent of your food budget on whole foods, and only 10 percent on processed foods (unfortunately most Americans currently do the opposite). This requires some strategy, especially if you're working with a tight budget:

You can generally plan a week of meals at a time, make sure you have all ingredients necessary on hand, and then do any prep work you can ahead of time so that dinner is easy to prepare if you're short on time in the evenings. It is no mystery that you will be eating lunch around noon every day so rather than rely on fast food at work, before you go to bed make a plan as to what you are going to take to work the next day. This is a marvelous simple strategy that will let you eat healthier, especially if you take healthy food from home in to work.

Just as restaurants are able to keep their costs down by getting food directly from a supplier, you, too, can take advantage of a direct farm-to-consumer relationship, either on an individual basis or by joining a food coop in your area. Many farmer's markets are now accepting food stamps as well, so this is an opportunity most everyone can join in on.